Interpreter Mode was recently released on December 12, 2019 for the Google Assistant. Just in time for my annual vacation. This year I was enroute to South Korea and Japan. I have never had the opportunity to learn Korean or Japanese. I've had an affinity for the cultures and was excited to explore. This recent release of interpreter mode allowed me to have a more loose conversation in these countries.


I've used Google translate for conversations. This is more of a turn-taking experience. You press the mic icon, speak, press the mic icon, it translates, the other person presses the mic, speaks and so on. While not a horrible experience it does take rigid turn taking and remembering to press the mic. That small act often interrupts the conversation flow for me. Great for getting around but what about those times traveling when you just want to get to know someone casually? Translate will do it but the conversation flow just isn't the same.

Welcome interpreter mode for the Google Assistant with 44 languages to interpret to. If you are on an Android you can start by saying "OK Google, Interpreter mode" or "Ok google, be my interpreter" a card will appear to confirm the language. While in another country the dominant language is determined from the geolocation. In my case while in Japan it offered Japanese; South Korea, Korean. Handy so I don't have to go searching for a language.

Once started the Assistant does something Google Translate doesn't do. It detects which language the speaker is speaking and translates to the opposite selection. I first explored this with my brother-in-law who speaks Korean. His Korean is not that of a native so has an american accent to it. The assistant did a decent job of translating with a few odd words thrown in. My 9 year old niece who likes to speak with the native accent threw some basic phrases out and was rewarded with more accurate translations. Once I arrived in Japan the struggle was real not having family to depend on for translation. My first opportunity for solo use came at the JR Railway ticket counter. Many Japanese do not speak English therefore translation tools are a requirement. The ticket agent and I did not seem to be on the same page so I opened the Assistant in interpreter mode. It worked flawlessly for us to clarify some things. The ticket agent noticeably relaxed when I was able to discuss the topic of time vs price in Japanese. This interaction got me thinking of how we can use this technology in an educational environment.
I took spanish in High School. French was also offered but my mother wanted me to take a language she was familiar with. Something I noticed in my own high school education was we never interacted with the French classes. Thinking on it I wonder what that kind of collaboration would have or could have looked like? I now know there are a lot of similarities in languages and having been to France I can get by from knowing what I do of Spanish. Those basic language skills I learned taking Spanish in high school have allowed me to get by in other countries speaking various languages. It's also helps me to shift and learn new computer programming languages. I came to the recognition of language similarities much later in life. I'm not fluent in any language other than English but I understand enough of the basic principles of conjugation to learn more of another language.
What would it look like for me to have had the opportunity to collaborate with the French class down the hall? Would I have gained a greater understanding of language as a whole? When I think about the non-tech interaction between the classes it doesn't feel too successful in my head. I'm sure teachers have explored this approach with classes and had varying results. But what about using technology to support the interaction?
I picture Interpretation mode being used with language classes to help gain a deeper understanding to the basics of language. Picture a small conversation between a french class and a spanish class interacting in the languages being learned. Interpreter supports the interaction while also providing students with discussion points on how each language is functioning and being used. Using the mode with two non-native languages creates a learning experience for both parties. While each may be working to learn their own assigned language they can work to bridge communication through newly acquired vocabulary.
Interpreter mode may give a way for language classes to interact. It also provides those students acquiring skills in English a way to participate. The detection of language and use for conversation gives students opportunities to interact culturally with classmates. Google Translate can also help if you remember to capture what is said by clicking the microphone. Google Assistant listens for the language and translates. It provides a greater ease of use more inline with an interpretation experience. Just imagine how it can help for parent teacher conferences when we often use the student as the interpreter... 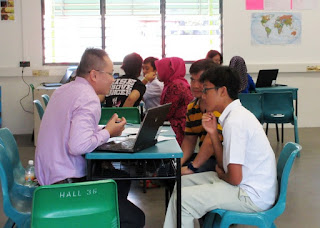