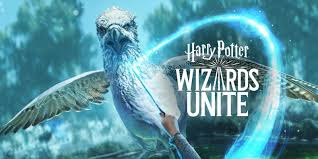 I find myself writing more with my finger than a pen. Granted it’s not by a large factor. Actually most of my writing is with my thumb on my phone’s keypad. However the writing I’m referring to is that scrawling flourish of an unintelligible signature.  When I sign for a delivery it’s with my right hand index finger flying over a mobile screen. When a signature is needed for a purchase it’s often with that same index finger on a touch device. And now when I cast a spell that finger attempts to complete the prestidigitation.

Niantic has released their newest game, Harry Potter: Wizards Unite for both iOS and Android using the underlying technology of Pokémon Go. You are in the role of a wizard helping to collect artifacts before the muggle (non-wizard) world learns of their existence. Each item, beast, or dark force has a mind of its own to stay and not be banished to the wizarding world. As a magic user yourself it’s your task to cast various spells magicking things to return. The unique educational gameplay element is each spell is reminiscent of an exercise in cursive for a strict teacher.

Cursive was not a strong point of mine in school. Neither was handwriting. Technology makes my writing legible. I did at least have an education in cursive. That gives me somewhat of a leg up with my wizardly casting. Many students aren't exposed to learning cursive in favor of providing STEM related curriculum. But now along comes Niantic with a great case for teaching it.

We interact with devices through typing, swiping, talking, and various other ways depending on need. With the rise of the touchscreen it was only a matter of time before we resorted back to what we know. The familiar is hard to escape from. While, yes, typing is still popular and has been around for over a century there is still something about the grapho-motor skill of writing that helps us retain notations we take better than tapping it out. Scrawling on a screen what you are thinking is almost natural. Though younger generations are faster at tapping with a single digit.

As technology progresses we have the ability to get back to our cursive writing and even have it transferred to print as we write. The gesture has been just a simple directional swipe.  Maybe a pinch. Possibly a three finger flick. But it hadn’t taken into account accuracy and speed. Gestures were intended to make it easy. Gameplay is intended to provide a challenge. How do we challenge kids playing on touch devices? Make them do cursive in gameplay.

Cursive has been ebbing a flowing in the classroom depending on what article you read. Augusta, Maine wants to make cursive a requirement through a bill. I would not be surprised to hear of students requesting to learn cursive just to help their game play. It’s a skill that may be on the rise in the future for other forms of interaction and shouldn't be disregarded. Cursive opens doors to creativity and provide a personal touch.

We have become use to the staple drop down menu at the top. We’ve memorized common shortcuts from the keyboard. But what about in a touch screen world? iOS has changed their gestures to support shortcuts for things like Copy and Paste. The gestures are still broad strokes. What will happen when more professional applications start taking on gesture shortcuts? 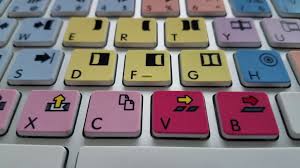 If you’ve ever seen a keyboard for editing music or video consider the challenge of turning it into gesture shortcuts. An obvious answer is to do something like what Niantic has done with its gameplay. While you may not be expected to be as accurate when gesturing for work it doesn’t hurt to build up those skills.

My handwriting is still horrible. I think I may need to start considering improving my finger flourish skills. Is there an app out there that I can practice finger writing? We may one day be concerned with our child's the dominant writing finger. parents will dread the child who prefers the middle finger flourish. If cursive isn't in your curriculum you may want to consider putting it in there. It can be connected to future tech skill. And if your students need practice direct them to Niantic's game. You may even want to consider throwing in some finger exercises. I'll be at ISTE this week in Philadelphia and I'll be curious of what others think of teaching finger cursive.
at June 22, 2019